OpenTopography is pleased to announce the release of new point cloud data covering 3,684 km2 of most of the Salt Lake and Utah Valleys as well as the Wasatch and West Valley Fault Zones. These data are the result of a multi-organization effort to support flood mapping, geologic fault mapping, transportation, infrastructure, solar energy, and vegetation management projects. The state of Utah, including the Utah Automated Geographic Reference Center, Utah Geological Survey, and the Utah Division of Emergency Management, along with local and federal partners, including Salt Lake County and local cities, the Federal Emergency Management Agency, the U.S. Geological Survey, and the U.S. Environmental Protection Agency, have funded and collected over 8380 km2 (3236 mi2) of high-resolution (0.5 or 1 meter) LiDAR data across the state since 2011.

One important application of this lidar data is to investigate the seismic hazard of the Wasatch fault zone. Researchers at UGS and USGS completed a large paleoseismic investigation near the Salt Lake City-Provo and Provo-Nephi fault zone boundaries to learn more about past earthquakes on these fault segments. The Wasatch Fault System is approximately 350km long (220 miles) with primarily normal slip sense. It is the boundary between the Basin and Range province to the west and the Colorado Plateau to the east. The Central Wasatch is a very active portion of the Wasatch Fault Zone, with a frequency of magnitude 7.0 earthquakes occurring about every 900-1300 years. Major population centers for Utah are close to the Central Wasatch Fault zone (see image below). For more information about earthquake safety in Utah, visit the Utah Geological Survey, Be Ready Utah, or Utah Seismic Safety Comission.

The data are full classified point cloud with an average point density of ~11 points/square meter covering an area of 3,684 square kilometers. The survey took place in 2013 and 2014 and was collected by Quantum Geospatial. Lidar returns include intensity and RGB values. Lidar derived raster products (DEMs etc) will be available shortly.

If you have a dataset you are interested in seeing on OpenTopography, please visit our data hosting page for more information about submission. For questions or comments, please contact us! 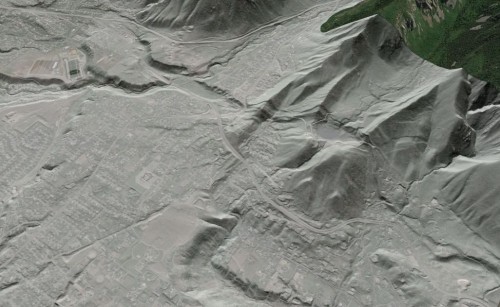 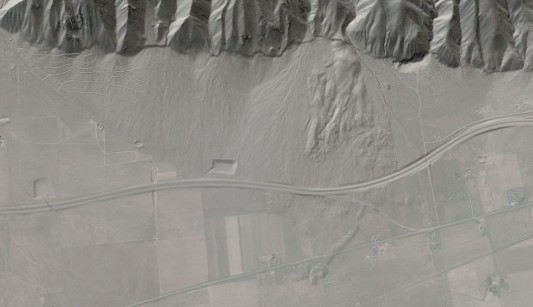 The Nephi segment of the Wasatch Fault system along the I-15 corridor with alluvial fans and landslide deposits. Image is a slightly oblique hillshade draped over Google Earth Imagery.