There has been some discussion recently regarding the status of the Death Valley-Fish Lake Valley lidar dataset collected on behalf of Principle Investigator Dr. James Dolan (USC) under the National Science Foundation GeoEarthScope project. These lidar data cover the Death Valley-Fish Lake Valley (DV-FLV) fault system on the California-Nevada border and are the last of the EarthScope funded lidar data to be made available through OpenTopography. The DV‐FLV lidar data were collected by NCALM under the pre‐community driven GeoEarthScope funding structure (GeoEarthScope Lidar Working Group report [pdf]) and thus fell under the standard two‐year embargo period afforded to NCALM data collected for NSF PIs.

However, a detailed inspection of the DV‐FLV dataset by OpenTopography staff revealed several significant issues with the dataset related to the initial dataset collection and partial re‐survey by NCALM. OpenTopography determined that the issues with the dataset were sufficient enough to not meet our standards of community data quality and documentation, and thus the data should not be shared until issues were resolved. In brief, the issues identified included: 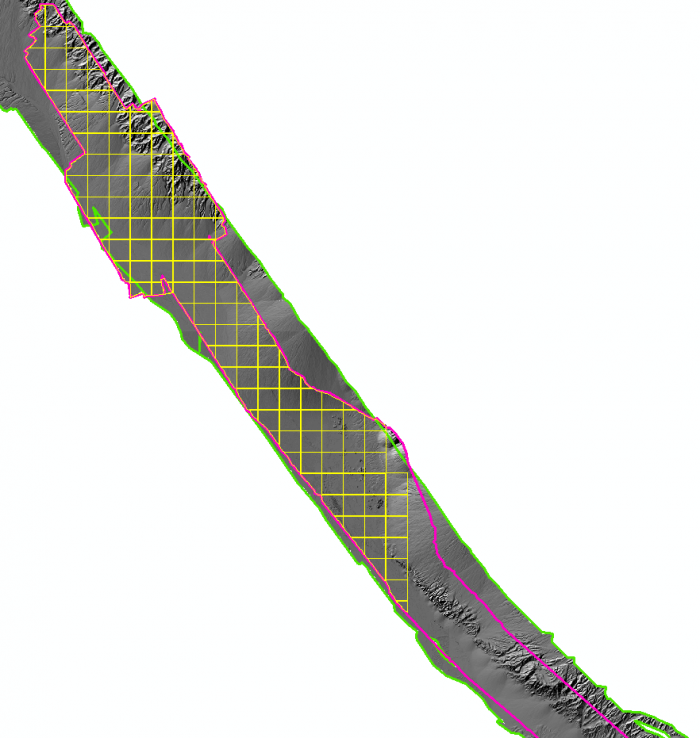 Incomplete data delivery: yellow tiles represent data delivered vs. magenta outline which is extent of re-survey. The green outlined hillshade image is the extent of the original survey.

Upon identification of the dataset issues described above, an email was sent to NCALM to request assistance with data re‐processing. NCALM determined that these data did have significant problems and that they should be re‐processed using NCALM's newest kinematic navigation processing methodology. In November, 2010 when NCALM announced plans to re‐process the dataset, they were unable to provide a timeline on account of other, higher‐priority, data processing tasks.

At this time OpenTopography is still awaiting a reprocessed dataset from NCALM to post. Both Dr. Dolan and OpenTopography have a complete copy of these data and would be happy to share them with users who are interested in working with these data in their current state. Please contact Dr. James Dolan or OpenTopography if you have interest in these data.