A quick look at NGA LiDAR from Haiti

As I pointed out in my last post, there has been a concerted effort by a number of groups to acquire LiDAR data over Haiti in the wake of the January 12th earthquake. In addition to the Rochester Institute of Technology and Navy groups operating in Haiti, the National Geospatial-Intelligence Agency (NGA) is also collecting data using the ALIRT instrument (described here I think). Some NGA LiDAR data products are available via the NGA Haiti Earthquake Crisis Relief site. The LiDAR data products are available in a somewhat haphazard form via the Haiti Filtered LiDAR subpage. Most of the "data" on this page are actually PDFs and PowerPoint files showing images of the data. However, there are a few actual data files - one LAS point cloud file and a few DEMs in 32-bit GeoTIFF format.

Since this is the first post-earthquake data I've seen available to the public, I pulled a few of these files and have been looking at them. Below is a screen capture of the LAS file (320,900 pts), which is described as the National Palace, but appears to actually be data from a neighborhood just NW of the Palace: 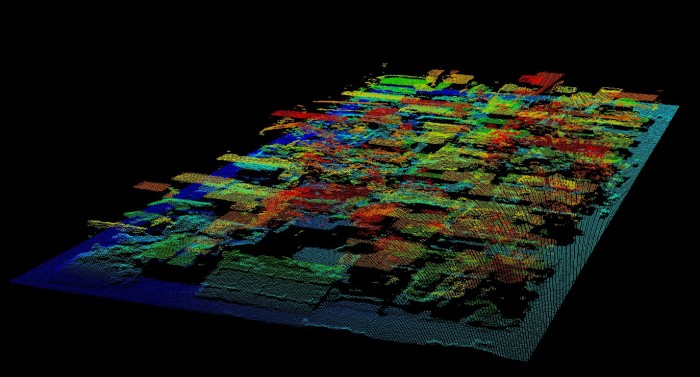 I gridded the point cloud data above at 25 centimeter resolution and exported it along with the data set footprint to Google Earth. Shown here: 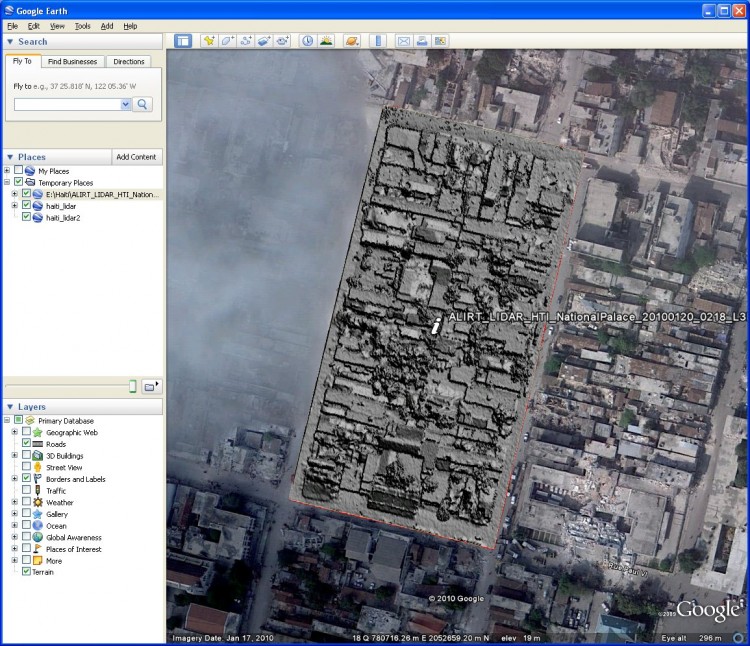 These data are pretty impressive, especially when viewed in tandem with the post-earthquake Google Earth images. There appears to be misalignment between the lidar and the imagery, but that may have been introduced when I gridded and exported the data to Google Earth (there is no metadata associated with these file, only the coordinate info in the LAS header (UTM z18N)).

The GeoTIFF DEMs produced by NGA and available on the site are also interesting to look at. Here is a 40 cm DEM overlain in Google Earth: 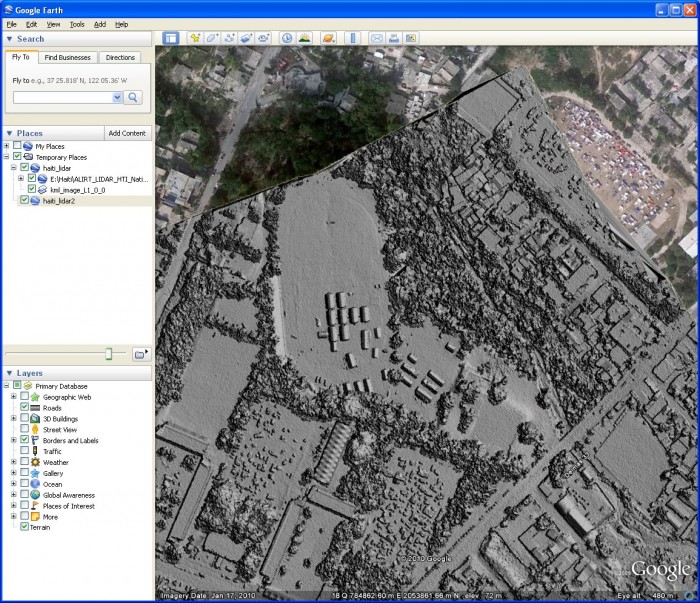 Comparison of the LiDAR data above, acquired January 25th, with the Google Earth imagery which was presumably acquired in the days immediately after the earthquake, shows that there is now a set of large tents (field hospital?) in the middle of the athletic fields that isn't present in the imagery.

It is unclear at this point how much of the data that NGA is collecting over Haiti will be made available to the public. I hope that they intend release the full data set in an easy to access manner (e.g. all the DEMs, the las files, or both). OpenTopography has been in contact with NGA and we've offered to host whatever portion of this data set they are willing to share with the scientific community and the general public. Stay tuned.